Hit enter to search or ESC to close

After 35 years of research, scientists have only just begun to understand the importance of the Human Endocannabinoid System (HEcS). The discovery of the HEcS is arguably the most important discovery in human physiology in the late Twentieth Century. Research has revealed that the HEcS is responsible for maintaining and controlling the body’s homeostasis, or balanced regulation of every system in the body. It does that through two known receptors called CB1 & CB2.

While the body produces its own endogenous cannabinoids, many scientists suggest that most people are now suffering from “Cannabinoid Deficiency”. Without sufficient cannabinoids in our diet, the HEcS operates at less than peak efficiency, resulting in a general decline in overall health. Supplementing our diets with full spectrum phytocannabinoids may be an essential component to achieving optimal health. 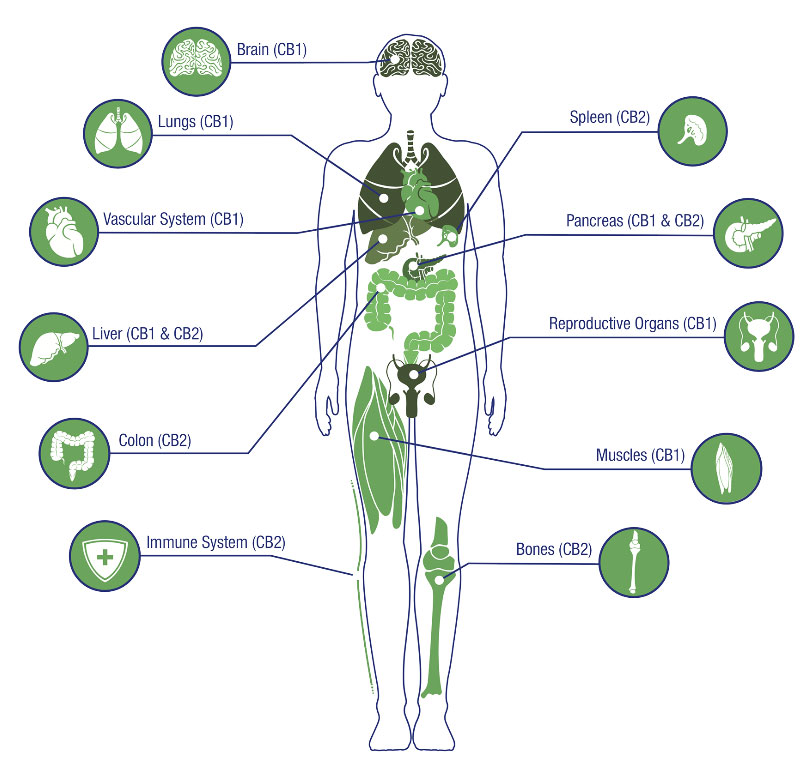 1) Endocannabinoids Endogenous-fatty-acid cannabinoids produced naturally in the body (e.g., anandamide and 2-AG)
2) Phytocannabinoids Concentrated in the oily resin of the buds and leaves of plants such as cannabis (e.g., THC and CBD)
3) Synthetic Cannabinoids Manufactured by artificial means such as in a laboratory

The Endocannabinoid System is found in every animal, except for insects, and regulates a broad range of biological functions. The ECS is a biochemical control system of neuromodulatory lipids (molecules that include fats, waxes, sterols and fat-soluble vitamins such as vitamins A, D, E and K and others) and specialized receptors config¬ured to accept certain cannabinoids. In general, a given receptor will accept only particular classes of compounds and will be unaffected by other compounds, just as a specific key is needed to open a lock.

Specialized receptors are located throughout the human body, including but not limited to, in the hippocampus (memory, learning), the cerebral cortex (decision-making, emotional behavior), the cerebellum (motor control, coordination), putamen (movement, learning), the hypothalamus (appetite, body temperature) and the amygdala (emotions). When a specific cannabinoid or combination of cannabinoids bind to a specialized receptor, an event or a series of events, is triggered in the cell, resulting in a change in the cell’s activity, its gene regulation and/or the signals that it sends to neighboring cells. This process is called “signal transduction.”

First detected in the brain, science now shows that CB1-R are also located in many other organs, connective tissues, gonads and glands. CB1-R are not found in the medulla oblongata (the part of the brain stem responsible for respiratory and cardiovascular functions). CB1-R play an important role in the coordination of movements, spatial orientation, sensory perceptions (taste, touch, smell, hearing), cognitive performance and motivation.

The most important function of the CB1-R is the reduction of excessive or inadequate signaling by the neurotransmitters (messengers) in the brain. By the activation of the CB1-R, the hyperactivity or hypoactivity of the messengers (e.g., serotonin, dopamine) is regulated back into balance. For example, when THC binds to CB1-R, activity in the pain circuits is inhibited, thus resulting in reduced pain. Many other symptoms such as nausea, muscle spasticity and seizures can be alleviated or diminished with cannabinoid therapy.

CB2-R are primarily associated with the immune system and found outside of the brain in such places as the gut, spleen, liver, heart, kidneys, bones, blood vessels, lymph cells, endocrine glands and reproductive organs. For example, CBD is keyed to CB2-R, and good evidence shows CBD is a beneficial therapeutic strategy to lessen the impact of inflammatory and neuro-inflammatory diseases. Until recently, it was believed that CB-2R played no role with nerve cells or bundles. However, studies now show that it also plays an important role in the signal processing of the brain.

A third receptor that gets little attention is the transient receptor potential vanilloid-type one (TRPV1). The function of TRPV1 is to detect and regulate body temperature. In addition, TRPV1 is responsible for the sensations of extreme external heat and pain and is subject to desensitization. Therefore, if continuously stimulated, the pathway will eventually slow down or even stop. This raises therapeutic possibilities for agents to effectively treat certain kinds of neuropathic pain.

Let's get social. Share your emVella story with the world.

*This product is not for use by or sale to persons under the age of 18. This product should be used only as directed on the label. It should not be used if you are pregnant or nursing. Consult with a physician before use if you have a serious medical condition or use prescription medications. A Doctor's advice should be sought before using this and any supplemental dietary product. All trademarks and copyrights are the property of their respective owners and are not affiliated with nor do they endorse this product. These statements have not been evaluated by the FDA. This product is not intended to diagnose, treat, cure or prevent any disease. Individual weight loss results will vary. By using this site, you agree to follow the Privacy Policy and all Terms & Conditions printed on this site. Void Where Prohibited by Law.
0